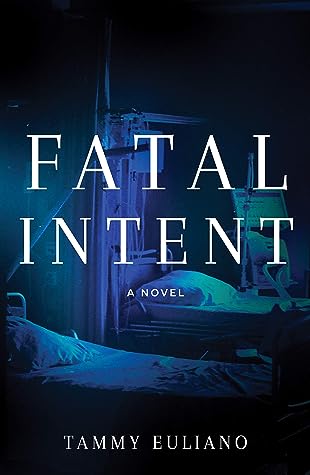 Tammy Euliano, author of Fatal Intent, has penned many academic publications, YouTube video’s, and an award-winning book. Fatal Intent is her first foray into true authorship. She is a practicing  anesthesiologist and a tenured professor at the University of Florida in Gainesville. Euliano and her husband reside in Gainesville.

Some of the main characters of Fatal Intent are Aunt Irm, Kate, Shadow, Greg, Christian, Jenn, Adam, and Todd. There are also numerous sub-characters who help the plot unfold.

Kate is married to Greg. Greg, was in the military, has had a terrible accident that left him virtually a vegetable on life support, but Kate cannot part with him just yet. Greg’s brother, Adam, has fought her to simply let him go. She lives with her Aunt Irm and her dog, Shadow. Kate is an anesthesiologist at the local hospital. Greg was a doctor too.

Christian’s father was in the hospital for a routine procedure and suddenly died. Christian wants to know how things could have gone awry.

Christian and Kate team up to find out what, if anything, went amiss. As they dig they find several other patients have also died under curious circumstances. Is there a commonality?

Jenn is a first-year medical resident and her boyfriend, Todd, is also a medical student. Jenn is bright and eager. Kate takes an instant liking to her and places her under her wing. Jenn and Todd join Kate and Christian in their quest to learn what is contributing to these unlikely deaths.

Kate has had a run of bad luck and is on probation. Her mentor, James, tries to help when he can because he thinks the Chief of Staff is being unfair with her given the circumstances. Another resident has hurled accusations about the conduct, or misconduct, of Kate and they are gaining traction. It appears that the Chief of Staff would prefer Kate resign and leave. She has worked hard to get where she is and does not want to give in. She has, however, made a few enemies along the way.

As time marches onward they learn that a lucum has partaken in every incident that involved an unlikely death. Can they locate him before his kills another? Can they convince the higher ups that there is a problem they need to learn more about?

This medical thriller was a real page turner. I learned a lot about medications and interactions and more about unnecessary surgical complications to last a lifetime. I really enjoyed it and believe you will too. Bravo to Tammy Euliano on her debut novel.