Out Of The Dark Review

Out Of The Dark Review

Out Of The Dark 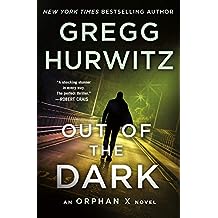 Gregg Hurwitz, author of Out Of The Dark, has penned more than twenty thrillers. (2018, insert) His works have garnered many awards and much acclaim. They have been translated into over thirty languages and landed him on the New York Times #1 Internationally Best-selling author list. Gregg also writes and produces screenplays, comic books for Marvel and DC, and scripts that have been seen on television and on the big screen. His academic articles have been used as educational syllabi for writing courses at UCLA, USC, and Harvard. His research for his works spans some incredible ranges and makes his works surreal. Hurwitz grew up in the San Francisco Bay area. His first novel was constructed while he was earning his Masters degree from Trinity College in Oxford where he also was heralded as a Knox fellow. (BA from Harvard) His athletic prowess was concentrated in pole vaulting and soccer. Currently he resides in L.A. To learn more about this impressive author please log on to www.gregghurwitz.net

I have personally read and reviewed three prior Orphan X books written by Gregg Hurwitz. I enjoyed all of them and was actually sorry to see them end.

Out Of The Dark is another Orphan X book. Orphan X name is Evan Smoak and he lived in a group home for orphans until he was twelve. He was recruited for a top-secret black ops program called the Orphan Program where he learned and mastered a valuable array of lethal and invisible survival skills that would serve him well for the remainder of his life. He has numerous identities and disguises that allow him to travel unnoticed by most governmental intelligence agencies. His works for the US government and other lay people who have been harmed and have no place else to turn.

The current President wants this program and all of its participants extinguished for good. Evan has conversely been hired to kill the President. The President has all of the best intelligence and black ops assets at his disposal plus he was the leader when this program came about, but can they manage to ensnare the wily Orphan X? Or will Orphan X kill the President despite his many layers of security?