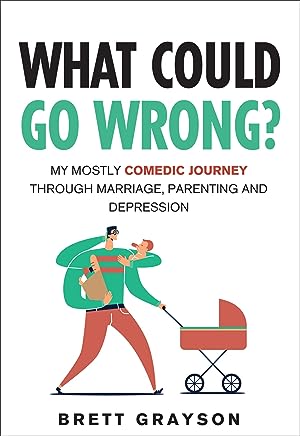 This book opens with author, Brett Grayson, and his wife being caught in a rather compromising position with one of their children and the family dog knocking on their bedroom door asking for assistance going to the bathroom. Grayson manages to capture this revealing moment perfectly with both grace and humor.

Chapter one finds Brett and his wife, Lauren, watching their friends finding out they are pregnant and having birthday parties for their youngsters. This backtracks to before he and she had their own children. Admittedly they are not sure they want to cross this bridge, but as most people their age see the pregnancy clock ticking.

In Chapter two Grayson discusses the laundry list of chores leading up to finding out one is pregnant. For instance, “Honey I didn’t get my period yet.” (2019, p.17) To which Brett replies, “When were you supposed to?” Her response is, “Four days ago.” Then, “So you’re pregnant.” The exchange continues. They agree to take a home pregnancy test to be certain. He takes the mundane and makes it not quite appealing, but at least somewhat humorous.

As a couple he laments that they were pregnant a couple of years before, but something went awry. This time they schedule doctors appointments and proceed together to ensure that things proceed as hoped for and planned. Brett jokes about the doctor resembling George Clooney and not wanting this character near his wife’s private parts.

Brett questions whether or not they are actually ready to become parents. He says, “…we were not freaking ready to be parents. We were two kids trying to play the part of adults, except we hadn’t really been acting like adults.” (2019, p.53) How many others have had similar thoughts as they moved through this life changing process?

Brett and Lauren end up attending Lamaze classes to prepare for the delivery. Prior to embarking on this class Brett says, “So I always kind of knew there was a thing called Lamaze. For the first thirty-five years of my life, Lamaze as a visual to me was a room where my mother and a bunch of other women were dressed in 70’s clothes, with bad haircuts and huge glasses.” (2019, p.57) Brett states that he also learned a lot of things about delivery in this class that may have been better left unspoken.

During delivery both parents were there as support. As time drew onward and the baby was closer to coming into the world Brett says “After one of the pushes was over, I looked away for a few seconds to give my eyes a brief break. I regrouped and turned back to ground zero. For some reason, as I caught a glance at Lauren’s vagina, it appeared to have gotten even hairier than it already was. …” (2019, p.75)  To which he quickly added, “Probably not a great time to tell her she needs to groom down there…”

This was an enlightening and revealing journey for me since I am not a mother. I also found it humorous and believe you might too.